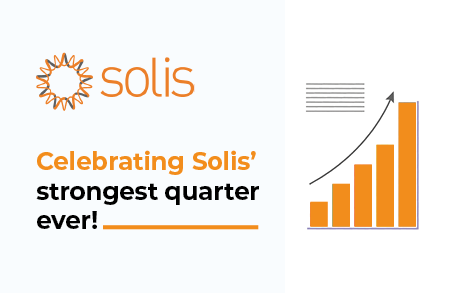 String inverter manufacturer Ginlong Solis (commonly known as ‘Solis’) marked its best quarter since the company’s founding in 2005. Solis brought in $52 million during the third quarter of 2019 alone: more revenue than that recorded during 2014, 2015 and 2016 combined.

As a publicly traded company that focuses exclusively on PV string inverters, Solis’ outstanding performance is a testament to the growth of its global operations as well as its fundamental role within the inverter market. Moreover, these results help to verify the growing market share held by Solis’ inverters.

A year of boosted revenue

Solis credits its revenue and profit achievements this year to both its market development operations and orders for inverters and other products. In addition to ramping up its production capabilities and marketing efforts, the manufacturer also revamped its accounts receivable collection, boosting net cash flow generated by operating activities by nearly 230%.

An impressive history lays the foundations for expansion

Solis has built its core business around string inverters since the company’s incorporation. The manufacturer’s founders began pursuing inverter technology in the United Kingdom in 2003 when the global PV market was in its infancy. In 2005, Solis returned to China to establish its industrial base in Ningbo. Fourteen years later, inverters now account for more than 95% of the total revenue.

Investing in people and innovation

Solis’ public debut on the Shenzhen Stock Exchange in March 2019 gave it the funds and net cash flow required to finance an increase in production capacity, optimise manufacturing processes and boost global sales and marketing. Cleverly, the company used this influx of funds to further its competitive advantage.

This economic expansion has helped the brand attract talented new R&D engineers, as well as offer more training to core team members and young recruits who will one day form the backbone of the company.

Focused on utility-scale project development as well as engineering, procurement and construction, the new division represents Solis’ pioneering approach to the Chinese market as it becomes more than a product supplier and moves upstream into utility plant deployment. Entering utility asset construction and ownership in China marks a pivotal shift for the company. The strategy is to leverage its cost-effective, cutting-edge manufacturing capabilities downstream. This plant-level experience will contribute to faster product development of its existing utility-scale string inverter technology.

Counting on a bankable partner

Solis’ focus on inverter technology allows it to meet customer needs in every corner of the solar industry. Well suited to residential, C&I and utility applications, Solis’ inverters are known for their reliable performance and extended system life. Independent accreditations, including its third-place ranking among Asian brands in BloombergNEF’s 2019 Inverter Bankability Report, attest to Solis’ dependability, product quality and all-round commendable financial performance.

Despite a fluctuating global market that constantly challenges companies throughout the industry, Solis continues to expand and grow. Armed with a global supply chain as well as world-class R&D and manufacturing capabilities, the brand has established an undeniably firm foundation for expansion well into the future.

Solis’ success is reflected in the quality of its solar inverters. SegenSolar is proud to stock these reliable products to guarantee optimised PV systems for customers across Africa. The best performing product of 2019 has been the 60kW Three-Phase Quad MPPT Commercial Inverter — explore the product’s features to find out why it was so popular.