Sharp partners with Toyota for a solar-powered Prius 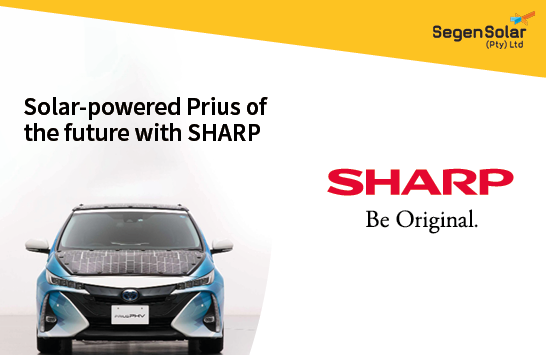 Sharp partners with Toyota for a solar-powered Prius

Petrol and diesel cars are among the world’s worst culprits for greenhouse gas emissions. It, therefore, comes as no surprise that innovators are starting to look at new ways to tackle the toxic substances emitted by this mode of transport.

Battery-powered cars — both hybrid and electric — are now on the market and available for the average consumer. However, while fuel-free vehicles are a step in the right direction to controlling emissions, these vehicles still require energy to charge the batteries. The power used to charge the batteries often comes from fossil fuels, which somewhat spoils the picture of an entirely eco-friendly car.

Japanese car manufacturer Toyota is experimenting with and pioneering the production of a solar-powered version of its popular Prius. The model incorporates ultra-thin solar panels which are to line the bonnet, rear window, roof and spoiler of Toyota’s standard Prius.

Sharp is the chosen manufacturer and will develop this satellite-inspired solar technology. The brand‘s innovation has facilitated the creation of the 0.03mm thick solar cells which are malleable enough to fit the form of the body of the car effortlessly.

What’s more: Sharp’s solar panels stand out from the market as they can achieve 34% efficiency — over 10% higher than typical commercially available solar modules. Electricity generated by the panels goes straight to the battery, so the vehicle charges regardless of whether it’s driving or parked.

This technology has been under testing since July 2018, and the scientists have, thus far, been able to add an average range (to the distance currently allowed by a full charge) of 35 miles while moving and 27 miles while stationary. With the daily distance driven by the average Westerner currently at 27 miles or less, a car fitted with these solar cells would, in theory, never need to be plugged in during typical use.

There is little doubt that this technology will revolutionise transport of the future. However, the cost of implementing solar panels on the body of a car is still far too high for the product to be commercialised and readily available.

Solar panels of such high efficiency are historically reserved for satellites; thus, the cost of a solar-fitted car would likely exceed what an average consumer would pay. In spite of this, solar panels of the modern day are up to ten times less expensive than those in production a decade ago, and Toyota’s continued experiments will drive costs down further.

Another challenge facing Toyota is the performance of solar panels in varying climates. Unfortunately, recent tests have demonstrated solar–cell performance drops during overcast weather or if it is too hot. The car would, as a consequence, need plugging in to recharge instead of relying on the energy from the sun.

Decreasing the total weight of the vehicle is also crucial for Toyota, as the solar batteries add around 80kg to the trunk of the car.

Founded in 1959, Sharp has the longest-standing experience in the solar industry. Sixty years of innovation means the company has established a diverse portfolio of panels, which are suitable for all climates and distributed across the globe.

The company offers a 10-year product warranty and a 25-year linear performance warranty on its products. Sharp is also the only manufacturer in the market whose experience exceeds its lengthiest product warranty.

In addition to leading the movement in renewable energy, Sharp is a world leader in clean manufacturing, voluntarily putting a rigorous ‘Super Green Factory’ evaluation system into place to ensure its carbon footprint is as small as possible.