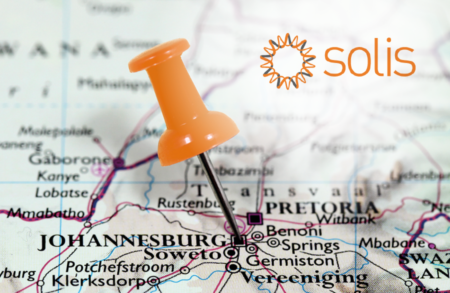 Across the last decade, inverter manufacturer Solis has transformed into a global household name, supplying dependable solar solutions for residential and commercial installations alike. While the reliability and performance of Solis’ inverters are already well-known, the company has also been recognised recently for its dedication to the renewable industry.

Solis’ accomplishments are demonstrated in its products’ versatility and adaptability to a variety of installations. Learn more about the inverters’ application to a site in Johannesburg, as well as what to expect from the company’s fifth generation of PV products…

In March 2018, a homeowner in Johannesburg sought to reduce his electricity consumption from the grid. Three of Solis’ single-phase inverters were cleverly used in the three-phase system complete with module maximisers. To monitor the system, a Solis Data Logging Box was used with a Solis 385 three-way cable loom to connect the three inverters to a single data logging centre.

The use of three single-phase inverters rather than one three-phase product allowed each inverter to produce power as per the load on each phase. This functionality means the inverters were not restricted to the lowest phase as they would be in a single product. What’s more, this made the system more efficient and resulted in cost savings of up to 45%!

For this installation, shading from trees onto the roof also posed a challenge to the design team. However, this was overcome by using module maximisers that are compatible with Solis inverters to reduce the effect of the shading.

Feedback received from the homeowner indicates he is incredibly happy with the work. The system has been loaded onto the Solis monitoring portal and is performing optimally.

But why is it so important to monitor your system?

In monitoring your solar project, you can achieve peace of mind that the system components are functioning as efficiently as possible. Vitally, homeowners can view how much energy and, therefore, how much money they are saving by opting for solar over power from the grid. This monitoring gives homeowners real-time visibility of how many kilowatt-hours the solar panels are producing and offers information on the health of PV systems.

The fifth generation of renewable energy

With Solis’ all-new 5G range comes the company’s most powerful inverter yet. Solis’ fifth generation of three-phase inverters range from 25kW to 40kW plus the 80kW inverter, as well as the 125kW product. The latter is Solis’ commercial powerhouse, specifically designed to meet the requirements of large-scale projects. By incorporating an efficient unit-MPPT and high voltage, Solis has recognised the market’s need for ultra-powerful products to support commercial installations and deliver the perfect solution.

Other unique benefits of the 5G range include:

SegenSolar’s customers can look forward to the arrival of Solis’ full 5G range soon — keep an eye out!

Are you a solar installer and want to know more about Solis’ products? Get in touch or discover the full range on SegenSolar’s website now.