Renusol: The future of solar in Europe 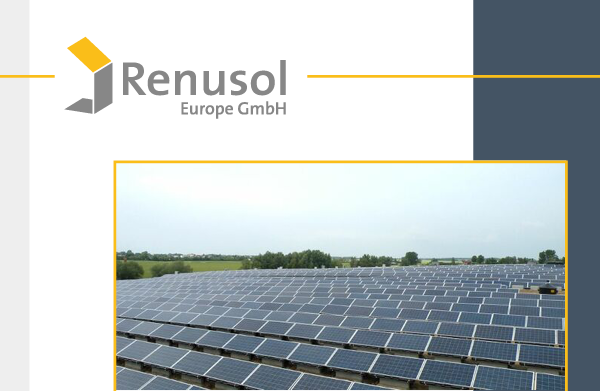 Renusol: The future of solar in Europe

The first rendition of the solar cell was developed in 1767 by Swiss scientist Horace-Benedict de Saussure. Later in 1839, French physicist Edmond Becquerel discovered the photovoltaic effect: when a voltage or electric current is produced when exposed to sunlight.

As such, it is no surprise that many of the world’s leading PV manufacturers are headquartered in Europe, such as Renusol, SMA, Schletter and Victron Energy.

To this day, European countries and their authorities continue to recognise that large-scale investment in solar power is one of the most viable ways to slow down global warming and protect the Earth for future generations.

A hotspot for renewable energy

Solar energy is due to be Europe’s primary power source before the end of the decade.

In July 2021, the EU unveiled its plans to increase the renewables share in its energy mix to 40% by 2030. Procurement of solar PV technology and implementing solar power plants across the continent is at the heart of achieving Europe’s zero-carbon goals.

The EU member states’ National Energy and Climate Plans also set out the bright future of solar in Europe, with 209 GW of solar PV capacity to be added by 2030 (amounting to 19 GW each year hereafter). Together with wind and energy, solar will continue to be the most widely installed energy generation technology in Europe over the next nine years.

The 26th United Nations Climate Change Conference is underway at the SEC, running from the 31st of October until the 12th of November.

As always, this summit unites parties to ‘accelerate action towards the goals of the Paris Agreement and the UN Framework Convention on Climate Change’.

Renewable energy — and specifically solar — will play a pivotal role in reducing carbon emissions and safeguarding the planet’s future.

Currently, the goals are fourfold.

The first is to secure global net zero by the middle of the century, keeping 1.5 degrees within reach. Plans for ambitious emission reductions with targets that align with achieving net-zero have been requested, with countries being urged to accelerate the phase-out of coal use, restrict deforestation, accelerate the uptake of electric vehicles and invest in renewable energy.

Goal two is to adapt to protect communities and natural habitats, working to restore ecosystems and safeguard the homes, livelihoods and lives of indigenous populations.

The third is to mobilise finance, where developed countries have been asked to release at least $100bn in climate finance to achieve goals one and two.

And finally, goal four focuses on the importance of working together to tackle the challenges of the climate crisis. Collaboration between governments, businesses and civil societies will be integral to delivering on the three goals above.

For the first eight months of 2021, Germany recorded a 3.6 GW deployment of solar energy, compared to 3.2 GW in the same period last year. The country’s total cumulative solar capacity exceeded 56 GW at the end of August 2021, the majority of which came from rooftop solar projects no bigger than 300 kW.

Renusol is devoted to an ethos of SIMPLE. SOLID. SERVICE.

Simple: The company’s PV mounting systems are both lightweight and easy to install, saving money on-site and in transport costs.

You can find Renusol’s precision-engineered PV mounting products on the SegenSolar portal. Log in to start purchasing or use Renusol’s unique PV-Configurator 3.0 to design an accurate, cost-effective mounting system now.