Gone are the days when solar power was expensive and inaccessible. Worldwide reports indicate photovoltaic (PV) power is not only outpacing fossil fuels in total global consumption but is also becoming cheaper than its polluting counterpart.

SegenSolar discusses just how much prices of solar have plummeted in recent years and why you should take advantage of this before it is too late.

With April mere months away, South Africa will see yet another increase in electricity prices. Each year, the government and Eskom bump up the costs of power for the country’s residents by 15–20% which is slowly becoming too little to meet Eskom’s monetary requirements as electricity supplies dwindle. Shockingly, even this figure is dwarfed by the 101% price rises that Zambian citizens are experiencing year upon year.

It is also no secret that the solar market in Southern Africa is booming. The energy from the sun is free, and while there is an upfront cost of installing a PV system, the return on investment is better than ever. As a result, there has never been a more prolific time to get involved with solar energy.

The cost of solar power is at an all-time low. Both residential and commercial customers (and installers!) must take advantage of these plummeting prices, which SegenSolar predicts will stabilise for between nine and 12 months.

In 2016, solar was costed at R9 per watt. Now, it has reduced by two thirds to just R3 per watt. For commercial buildings, it is the most optimal time for solar as companies will be able to divert the money currently going into hefty electricity bills to boost their sales and overall business instead.

Adnan Amin, General Director for the International Renewable Energy Agency (commonly known as IRENA), has stated that turning to renewables for power generation is now a smart economic decision to make — not just an environmentally conscious one. Project and auction data also suggest commercialised renewable technologies will be actively competing in 2020 while significantly undercutting fossil fuels, too.

IRENA’s report sets out that in 2017, solar PV module costs had fallen by about four-fifths, making residential solar PV systems as much as two-thirds cheaper than in 2010. These costs are only going down.

By using solar for your home or business now, you are locking in your electricity costs for decades to come. It makes sense that in starting your payback period earlier, the investment will begin returning payments to you sooner.

No compromises on performance

Not only is solar becoming more affordable, but it is also getting more efficient as science and technology progresses.

The graph from Wood Mackenzie below highlights this trend. Global solar module production is steadily rising while prices are continuing to drop. 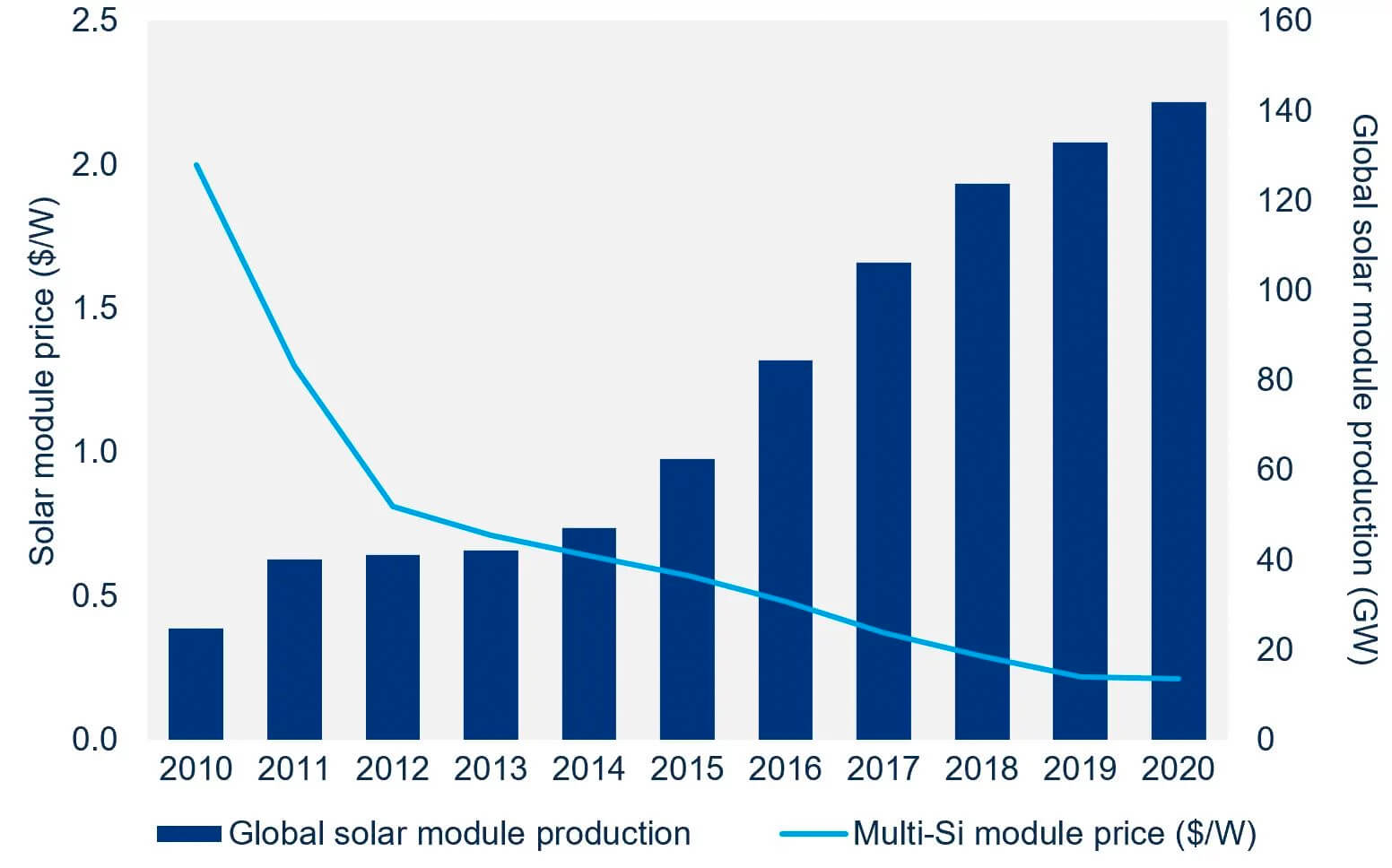 In 2010, the average power output of a standard 72-cell module was roughly 290 watts. Spectacularly, modules now offer a minimum of 365 watts at one-tenth of the price. Other improvements include the development of passivated emitter and rear contact (PERC) cells and bifacial panel technology.

Bifacial panels generate electricity from both the back and the front of the module. They offer up to 15% more output with a minimal premium, meaning fewer modules are needed to produce the same amount of electricity. The bifacial module market will grow tenfold by 2024, and annual bifacial module capacity is forecast to quadruple that of 2019 in the next five years.

SegenSolar stocks market-leading bifacial panels from Canadian Solar which provide 30% more yield thanks to the energy generated by the back-side. The panels are more reliable and offer better shade tolerance.

Moreover, companies such as  Solarise Africa  and  The Sun Exchange  are getting involved with funding programmes for both homeowners and business owners in South Africa looking for financial assistance when installing a PV system.

Owing to all the above factors, the time to act is now. Choose SegenSolar.

SegenSolar offers mono PERC panels from big names such as JA Solar and KODAK Solar Products. The PV equipment available is both competitively priced and backed by an unmatched service thanks to the dedicated team on the ground in both Johannesburg and Cape Town. Get in touch now.

We use cookies to ensure that we give you the best experience on our website. If you continue to use this site we will assume that you are happy with it.Ok